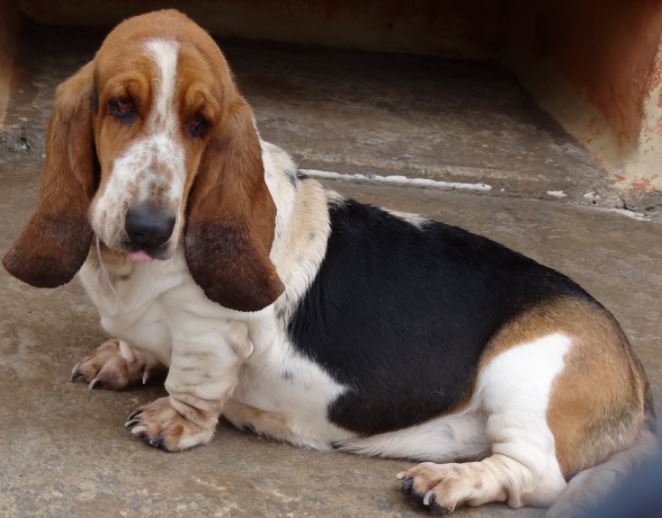 The Basset Hound is a really unique dog. It has short legs that have the heaviest bones in relation to it’s size, compared to any other breed. The body is strong and long. The head is also long but well proportioned, the back is moderately marked. The muzzle is big and heavy, with lips that dangle. The eyes are very soft and sad, which makes them look irresistible. The tail, always carried casually, gives the true characteristic of its character, which is in reality is docile and happy.

Color: it generally has 3 colors (black, fire and white) or two colors (yellow and white); However, any other color typical of hunting dogs is seen sometimes.

It comes from the Norman Artesian basset, which was imported from France to England in the middle of the 19th century, before being crossed with the Bloodhound. They were similar to those dogs seen today, but had smaller dimensions. The last progress of the breed was taken by the Americans who adopted the breed and created a companion dog instead of a hunting dog that it used to be. After a while, when the United States had taken ownership of the dog breed, the officials finally gave it back to England in the 80’s.

The Basset Hound is not only smart, but it is really a dog that can live in harmony with any person or any other animal. Never aggressive, it is always friendly, gentle and safe to be around children with whom it is a great companion and protector. As it was selected for pack work, it rarely fights and gets along well with other dogs. It even gets along with the same sex. It’s peaceful nature also allows it to get along with cats and other animals.

It is much better for this dog to live inside. However, the Basset Hound is still a common dog and adapts to it’s environment. It is therefore necessary to take it to the countryside or out for walks as often as possible. It needs to do a lot of physical exercise and, contrary to what it’s appearance might suggest, it can run very fast!

It is a tough dog that can live a long time in very good health. It fears the cold and, even more, the humidity. It should not get too overweight because its spine can have issues. For the same reasons, it should not go up or down the stairs too often.

Today it is mostly a pet dog, much more common in the USA than in Europe, where it is still often kept in too small of a house. In reality, the Basset Hound is not small despite its short legs. They are also much better to keep indoors than most other toy breeds.