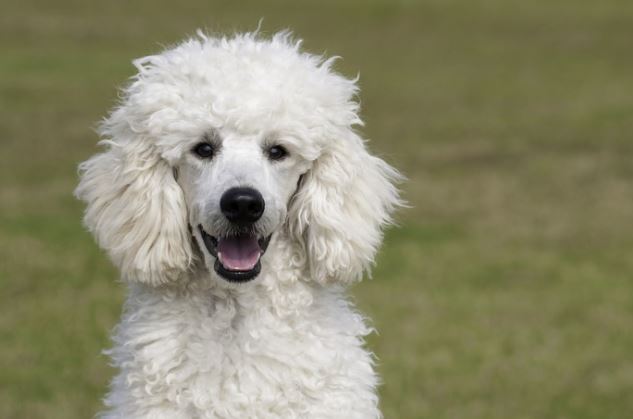 The four varieties of size (large, medium, small and miniature) are then divided into five sub-varieties of color: black, white, brown, gray and apricot. The general appearance is of a harmonious, docile dog, with the standard curly hair. There is a string haired variety, but it is now very rare. The head is elegant, straight, well cut and proportionate to the trunk: it must not be heavy or big but not too fine either. The neck is solid and proudly holds the head high. The body is well proportioned, with the trunk slightly longer than the height. The chest circumference measured behind the shoulders must be greater than the height at the withers by at least a few centimeters. The poodle’s appearance is an important feature of the breed: light and elegant.

The ancestors of the present Poodle were hunting dogs with a rustic appearance and a fierce character. Modern selection has, however, gone more towards the creation of a companion dog, becoming one of the most popular and widespread breeds in the world. In spite of this, the name of the dog still references, in almost all languages, its tendency to hunt. For example, in French language, the word Poodle comes from “duck”. In German it is called Pudel which means “swimmer”.

It is a dog of extreme courage, happy to live, curious, cheerful, sympathetic and intelligent. It is even considered to be one of the most intelligent dogs in the world. It is certainly the dog most happy to learn new things and it is not a coincidence that the breed is used in circuses. To please it’s master, it is ready to perform even very complicated tasks. From it’s hunting past, it has remained a great swimmer.

Like all pet dogs, it’s ideal environment is the home of it’s master, but a Poodle can also live in some outdoor climates depending on the temperature. The Toy types are a little more sensitive and often suffer from the cold so they must live inside almost always. If a Poodle lives outside, it must always have the possibility of returning to the house whenever it wants, because it loves it’s master’s company, and without it begins to get lonely.

The only negative points of the Poodle is its ears. They are prone to infections if they are not cleaned regularly. They are also a very robust dog and one that has one of the longest lifespans. It does not live an average of twelve years like most dogs, but fifteen and sometimes even longer.