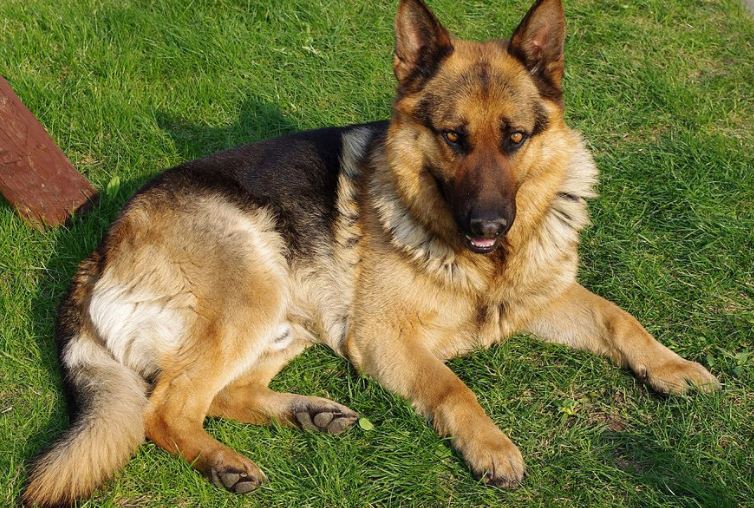 The German Shepherd is a slightly larger than average dog, rather long, robust and very muscular. The limbs are well proportioned and oriented in such a way that they allow a strong thrust of the posterior and a very good placement of the anterior part. The dog is constructed like a pure trotter. The head is proportionate to the body, dry, moderately broad between the ears. The muzzle is powerful. The ears are of medium size, broad at the base, and upright. The eyes are oval shaped and should be as dark as possible. The tail should at least reach the hock.

Hair: short, hard, compact, straight and well groomed, with an undercoat that sheds. Long-haired subjects are not as desirable by most standards and can not participate in some shows.

Color: black and gray, single color or with regular fire spots. The color white is not desired as much.

At the end of the nineteenth century in Germany, progress was being made in bringing about the end of sheep farming. A group of dog owners decided to save the shepherd breeds, because of their valuable genetics. They created a dog full of good qualities, beautiful, docile and robust, easy to breed and maintain. Thus, from the crossing between different Shepherds, these enthusiasts obtained a new breed which, thanks to people soon became the most beloved and the most widespread dog in much of the world. Its official recognition dates back to the 1800’s.

The character of the German shepherd has made it almost as famous as its beauty. It is an energetic dog who loves to play, is very easy to train and always eager to please its master. It is practically suitable for everyone, including children as long as they respect its boundaries. It can handle any function, from pet to a watchdog, defense, or rescue scenarios. It is also used as a guide dog for the blind and represents perhaps the highest intelligence among dog breeds.

Needs Of The Breed

The German Shepherd can stay outdoors in any season but likes to live in a house because it needs human contact. Some can accept apartment life but only if they get out often and have a human with them.

They should have a good place to sleep in the house at all times. They do however have a tendency to chew so a good chew proof dog bed will work well.

German shepherds, like all young dogs, are foolish. But with perseverance and patience, your pet will obey you. True, they tend to want to play but is not a good way to educate them. Firmness and discipline are necessary for them to listen to you.

It’s not necessary to punish your dog when crate training them. Just make sure to get a good dog crate that they cant get out of. Click here to view some of these escape proof crates.

If raised properly, it is a strong and very sturdy dog. Many people think that this breed is more prone than others to hip problems. This has some truth, although this genetic malformation can affect almost all medium or large size dogs. The specialized clubs in charge of the German shepherd were the first to bring this issue to light. This caused an unfortunate association between this breed and the disease but also allowed people to monitor this problem.

They are also slightly more likely to develop arthritis than other breeds. This can be helped somewhat by using one of these orthopedic beds for them. Today, it’s common for the best breeders to only breed dogs that don’t have some of these issues.