The Chihuahua is the smallest of all dogs. They are a very funny breed, although somewhat nervous. They love their family but don’t take too kindly to strangers.

Chihuahuas are considered the smallest dog breed in the world. Named after the largest state of the Mexican Republic, where they had lived in the wild and were later captured and domesticated by the Indians. Drawings of a pygmy dog ​, that inhabited in Tula, were included in the decoration of ancient architecture which were very similar to the present day dog. 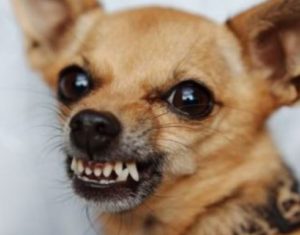 General appearance: It is a dog with a compact body. It’s important to note that its head is an egg shape and its tail is moderately long, carried in a high arch or semicircle, with the tip directed towards the back.

Proportions: The body length is slightly larger than the height at the withers, making an almost square body, especially in the males.

Nose: Moderately short and slightly spattered. Any color is possible.

Muzzle: Short. Seen from the side it maintains a straight line, being wider at its base and tapering towards the tip.

Jaws and Teeth: Has a scissor bite.

Eyes: They are large and round, very expressive, perfectly dark. Light eyes occur but are not desirable.

Ears: Large, erect and wide open. They are wide at the base and gradually reduce to a rounded tip.

Skin: No dewlap. The long-haired variety has an extremely plush mane of hair.

Tail: Moderately long, with a high placement, wide at its base while gradually reducing towards the tip.

Hindquarters: Well muscled, long bones, well built and parallel to each other with good angulation in the bones.

Movement: It has a long and active step, with good anterior reach and lots of posterior thrust. Seen from behind, the hindquarters are almost parallel to each other.

Skin: Smooth and elastic throughout the body surface.

Hair: There are two varieties in this breed.

Short Hair Variety: It is short and all over the body. It is slightly longer in the neck and tail, short on the face and ears. It is bright with a smooth texture.

Color: All colors occur with different shades and combinations.

Who Should Get A Chihuahua

Anyone that want’s a smaller lapdog that is lively and energetic would benefit from this dog breed. If you have small children or other pets this may not be the best choice as these dogs tend to get a bit jealous.