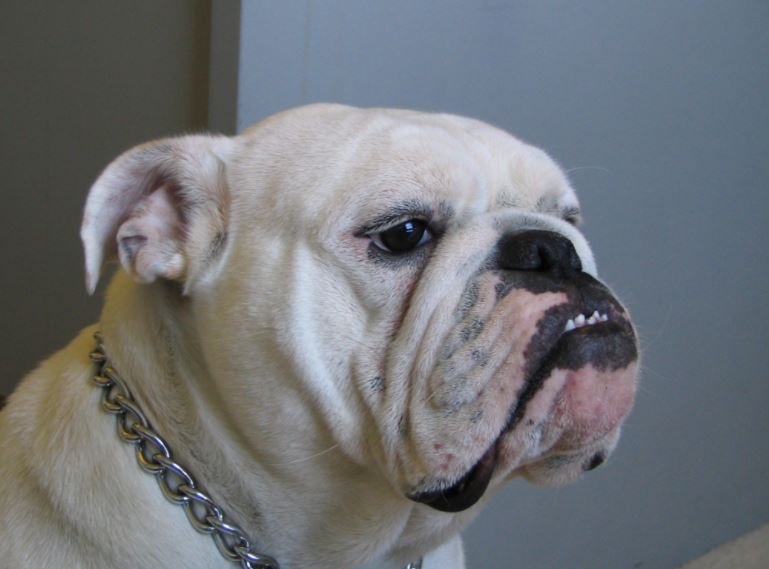 Bulldog General Appearance: It is a dog with short hair, heavy complexion, rather low in stature, wide, powerful and compact. The head is rather large in proportion to its size, but no part of its body should be huge relative to the others, thus breaking the general proportions. A short face, wide muzzle, blunt and upward nose are good. Dogs showing respiratory problems are highly undesirable. Short body, good structure, no tendency to get fat is ideal.

Bulldog Behavior: It should give the impression of determination, strength and activity. Alert, brave, loyal, dependent, courageous, fierce in appearance, but possessing an affectionate nature.

Head: Viewed from the side, the head looks very high and goes from the back to the tip of the nose. A flat front with skin on and around the head, loose and subtly wrinkles, not protruding from the face. In appearance the frontal bones are prominent, wide, square and tall. From the frontal depression, a wide and deep groove extending to the middle of the skull is good. The face, from the bones of the cheek to the nose, cuts, with wrinkled skin.

Skull: Large skull in circumference. Viewed from the front it looks very high from the angle of the lower jaw to the top of the skull, also very wide and square.

Facial region: From the front the various properties of the face should be equally balanced towards both sides of an imaginary central line.

Nose: Narrow and large nostrils, broad and black, under no circumstances red or brown.

Muzzle: Muzzle short, wide, Spattered, very deep from the angle of the eye to the corner of the lips.

Lips: Thick, wide, pendulous and very deep beaks, hanging completely on the sides of the lower jaw, not on the front, the two lips meet in front while almost covering the teeth.

Jaws and Teeth: Broad, massive, square jaws, the lower jaw projecting forward from the upper jaw and turning upwards. Wide and square jaws with six small frontal teeth between the canines. Canines well separated from each other, large and strong teeth that should not be seen when the mouth is closed. When viewed from the front the lower jaw is seen exactly below the upper and running parallel to it.

Cheeks: Cheeks well rounded and extending laterally beyond the eyes.

Eyes: Viewed from the front, located low in the skull, well separated from the ears. The eyes and the naso-frontal depression are in a same straight line, at right angles to the frontal groove. Well apart, however, the outer corners within the outer line of the cheeks. Rounded, moderate size, neither sunken nor prominent, very dark in color, almost black, not showing white when looking directly at the front. Free from obvious eye problems.

Ears: High insertion, This means, the front edge of each ear touches the edge of the skull on its upper margin, so that they are as far apart from each other as possible. Small, thin ears are desirable.

Neck: Moderately long, very thick, deep and strong. Well arched at the top, with abundant loose, thick, wrinkled skin around the throat, forming a dewlap on each side, from the lower jaw to the chest.

Body: It goes slightly to the back behind the tip of the scapula from where the spine rises to the back, curving again more suddenly towards the tail, forming an arch that is distinctive feature of the bulldog.

Back: Short, strong and broad back with a comparatively narrow shoulder blade height.

Chest: Wide chest, laterally rounded, prominent and deep. Body with well defined ribs back. Thorax is spacious, rounded and very deep from the top of the scapulae to the lower part where it joins the chest. Well descended between the front legs. Large diameter, rounded behind the front legs (not being flat to the sides, Well rounded ribs)

Abdomen: Abdomen retracted and not hanging.

Tail: Positioned low, being rather straight and then sloping downward. Rounded, smooth and devoid of fringe or coarse hair.

Knees: Rounded knees, turned slightly away from the body.

Color: Solid or mixed. White and split (that means, the combination of white with different colors)