The Bloodhound is a common breed of dog known for it’s great sense of smell. We will go over the traits of this breed below. 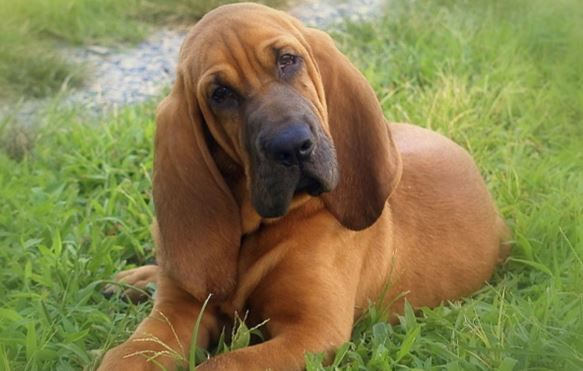 It is believed that it comes from the Middle East and was introduced to Europe by the Cross Knights.
Other sources however tell us that it was the dog of the Celts and the Gauls. The Greeks called it Segusium, this gives us an idea of the antiquity of it’s establishment on the European continent.
In the earlier centuries in the monastery of Europe, this race was established, in southwestern Belgium. When it arrived in Britain, it’s name was changed to Bloodhound, as it is known today.
It is regarded as the father of numerous breeds of hound dogs all over the world. The most impressive trait is it’s sense of smell, which is why it has always been used for tracing and locating people by law enforcement and military.

As previously commented has an exceptional smell, so we can give the well-deserved title of the best smell in the world. It is s quieter dog that behaves well during walks usually. Although if it catches wind of an animal or good smell it will be gone quite fast.

Stripes and fire, black and fire or reddish. White spots are common on the chest, legs and tip of the tail.

Short, strong and hard, but softer in the head and snout area.

Large compared to the body, with long wrinkled skin. It gives the impression of the dog having a smaller head than it really does because of the snout being rather flat, with lips that fall to the sides of the mouth. The nostrils are usually open and fairly big in size. The ears are long, silky  and sit low on the head.
The neck is rather long, but strong. It allows it to follow the trail at ground level with good speed when it uncovers a new scent.

The body is compact and strong, it gives the appearance of being a square dog because of its general shape. The ribs are kind of bowed inwards.
Front Tips: Straight and powerful.
Hind extremities: Strong
Feet: Round.
Tail: Long with high implantation, falls straight.
Lifespan: 10 to 12 years.